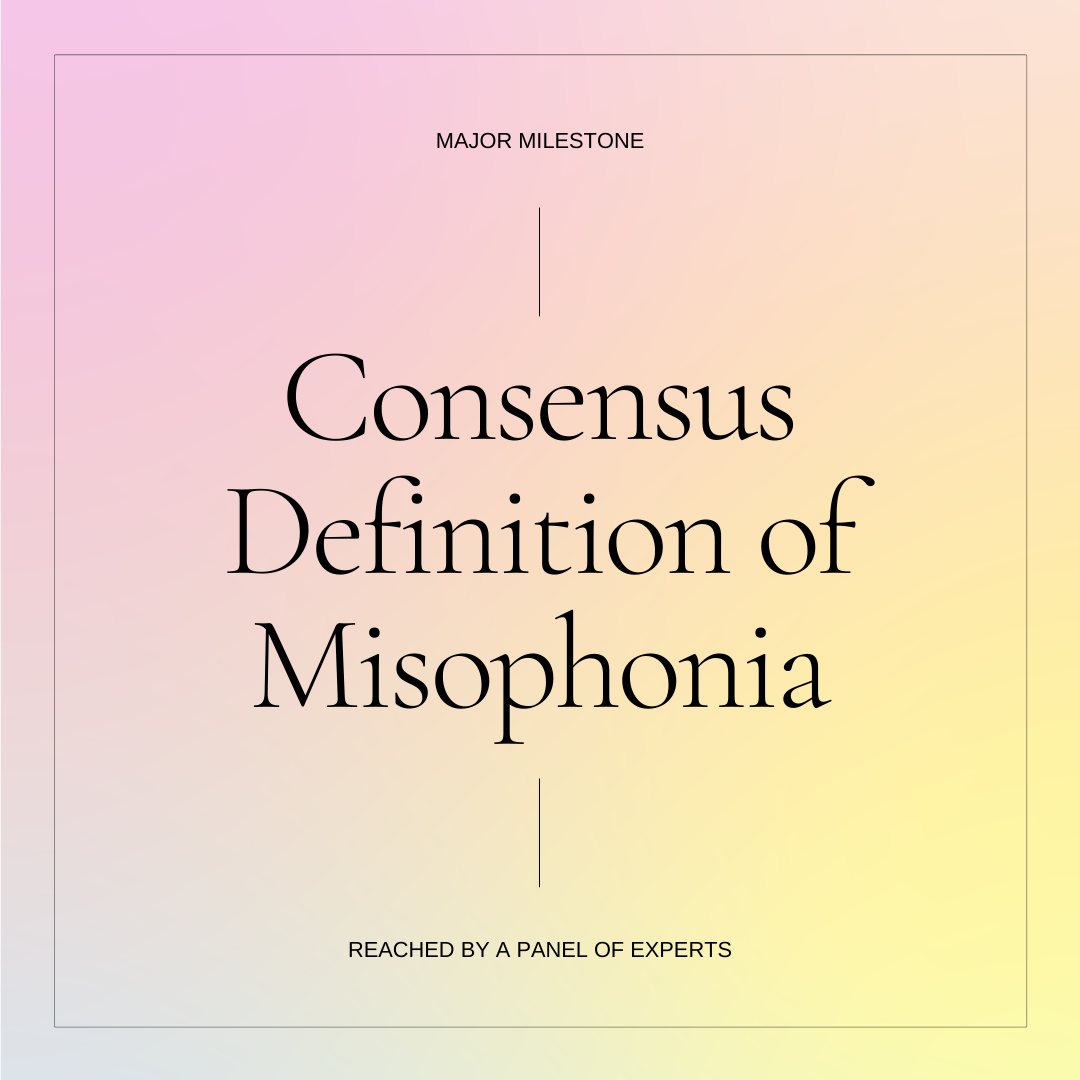 There are many descriptions and explanations of what misophonia is floating around in articles and websites, but this is a first time a panel of experts has reached a consensus for a definition of misophonia. Over six months they conducted four rounds of iterative voting and revisions through a process called the Delphi method. The panel included a committee of 15 experts that had to reach a consensus threshold of 80%.

The conclusion of what is misophonia is published in an article. If you’d like to read it, you can find it on the medRxiv website. In addition to the definition achieved, the article includes links to many of the cornerstone research publications about misophonia in a variety of fields, such as Audiology, Psychology, Psychiatry, and Neuroscience. We encourage you to read the article, but here are a couple of important excerpts from the consensus:

Misophonia is a disorder of decreased tolerance to specific sounds or stimuli associated with such sounds. These stimuli, known as “triggers,” are experienced as unpleasant or distressing and tend to evoke strong negative emotional, physiological, and behavioral responses that are not seen in most other people. Misophonic responses do not seem to be elicited by the loudness of auditory stimuli, but rather by the specific pattern or meaning to an individual. Trigger stimuli are often repetitive and primarily, but not exclusively, include stimuli generated by another individual, especially those produced by the human body. Once a trigger stimulus is detected, individuals with misophonia may have difficulty distracting themselves from the stimulus and may experience suffering, distress, and/or impairment in social, occupational, or academic functioning. The expression of misophonic symptoms varies, as does the severity, which ranges from mild to severe impairments. Some individuals with misophonia are aware that their reactions to misophonic trigger stimuli are disproportionate to the circumstances. Misophonia symptoms are typically first observed in childhood or early adolescence.

In response to specific trigger stimuli, individuals with misophonia may experience a range of negative affective reactions. Anger, irritation, disgust, and anxiety are most common, though some individuals may experience rage. Misophonic triggers may evoke increased autonomic arousal such as increased muscular tension, increased heart rate, and sweating.

Trigger stimuli may also evoke strong behavioral reactions such as agitation or aggression directed towards the individual producing the stimulus. On rare occasions, aggression may be expressed as verbal or physical outbursts although these responses are seen more in children with misophonia than in adults. Individuals with misophonia often engage in behaviors to mitigate their reactions to triggers such as: avoiding or escaping from situations in which they encounter trigger stimuli; seeking to discontinue the triggering stimuli; mimicking or reproducing the triggers.

The hope is that having achieved this standardized definition will move research forward on this debilitation condition, help develop diagnostic tools and hopefully lead to a cure.

Read our other blog entries and reach out if you have a misophonia related story, approach, solution that you’d like to share!

Founder of Miso Match. Excited to launch this platform connecting Misophonia sufferers to create friendships and local groups, as well as MisoTech, a central place for reviewing products that help with miso by misophones only.